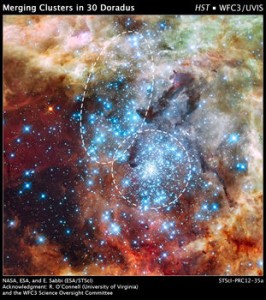 Astronomers have discovered two clusters full of  very bright stars on the verge of merging. The clusters are located at a distance of 170,000 light years from Earth in the Large Magellanic Cloud, a small satellite galaxy of our Milky Way.

What always seemed to be a single cluster in the center of 30 Doradus (also called the Tarantula Nebula), appears in reality a composite of two clusters, that differ in age by one million years. Using the Hubble Space Telescope the astronomers could detect for the first time the faint stars. During the investigation, led by Elena Sabbi (Space Telescope Science Institute in Baltimore) it was noted that there was something strange going on with the cluster. It is not spherical, as expected, but consists of two parts. “One of the parts is distorted and stretched as a result of gravity,” said Mark Gieles (University of Cambridge). “And that is exactly what you expect when two clusters are about to merge.”

30 Doradus an active stellar nursery where stars are born in clouds of gas and dust  for already more than 20 million years. According to some models, the giant clouds from which star clusters are created fall apart in smaller pieces. The small parts can later merge into a heavy cluster. This is what the astronomers think to see in the center of 30 Doradus.

During the merger many stars are thrown out, sometimes at speeds of more than 100,000 km per hour, as shown in the animation, which is based on computer simulations. This may offer an explanation for the surprisingly high number of very massive stars in the vicinity of the two clusters. Next year the astronomers will observe this area again with Hubble. They hope to find the fastest moving stars by comparing the the old and the new images.”

The study of these areas remains very difficult because of the gas and dust that blocks the stars from view. Hubble’s successor, the future James Webb Space Telescope, will look at infrared light to look deeper into the nebula. In this way, many open questions about the star formation can be answered. It will also reveal whether more clusters in the neighborhood are about to merge with the two observed clusters