New Paper: How many massive stars are product of a binary merger? 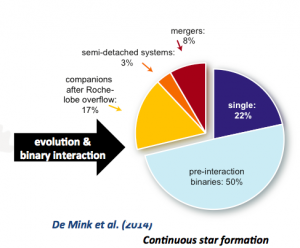 Incidence of mergers and other products among a typical population of massive stars.

A merger between two stars may sound like an exotic event, but for massive stars this is not rare at all.  About a quarter has a companion that is so close that the two stars will coalesce to form a new rejuvenated star (Sana, de Mink et al. Science 2012). In this paper we simulate the evolution of the stars and their interaction processes.  We predict the incidence of stellar mergers and other products of binary evolution among a typical stellar population. Furthermore we show that these products typically appear to be single stars.  Published in Astrophysical Journal, De Mink et al. (2014).