A failed search for a surviving companion of Supernova 1994I 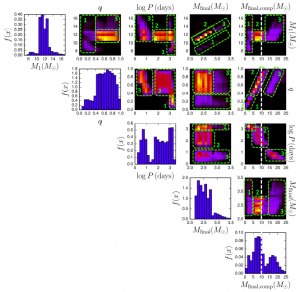 Core-collapse supernovae (SNe) are among the most powerful explosions in the Universe. They mark the deaths of massive stars, most of which are thought to spend their life with in close binary systems. Twenty years after the explosion SN 1994I, long considered to be the result of a binary system, we use Hubble to search for a companion. No companion was detected. We derive deep upper limits in the ultra violet, which allow us to exclude the presence of a main sequence companion with a mass > 10M⊙

We compare with extensive simulations conducted by Manos Zapartas and show that the new data excludes interacting binaries with semi-conservative (late Case A or early Case B) mass transfer. The limits tend to favor systems with non-conservative, late Case B mass transfer with intermediate initial orbital periods and mass ratios. The most likely mass range for a putative main sequence companion would be ∼5–12M⊙, the upper end of which corresponds to the inferred upper detection limit.

Results will be published in the Astrophysical Journal, by Van Dyk, de Mink and Zapartas, 2016.