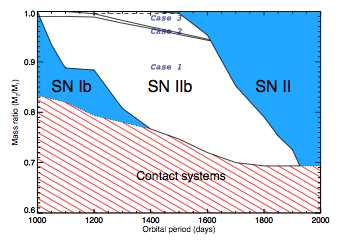 Massive stars that lose their hydrogen-rich envelope down to a few tenths of a solar mass explode as extended type IIb supernovae, an intriguing subtype that links the hydrogen-rich type II supernovae with the hydrogen-poor type Ib and Ic. The progenitors may be very massive single stars that lose their envelope due to their stellar wind, but mass stripping due to interaction with a companion star in a binary system is currently considered to be the dominant formation channel. We computed an extensive grid of binary models with the Eggleton binary evolution code. The predicted rate from our standard models, which assume conservative mass transfer, is about 6 times smaller than the current rate indicated by observations. It is larger but still comparable to the rate expected from single stars. To recover the observed rate we must generously allow for uncertainties and low accretion efficiencies in combination with limited angular momentum loss from the system. Motivated by the claims of detection and non-detection of companions for a few IIb supernovae, we investigate the properties of the secondary star at the moment of explosion. We identify three cases: (1) the companion appears as a hot O star in about 90% of the cases, (2) the companion becomes an over-luminous B star in about 3% of the cases, or (3) the companion will appear as a K supergiant. The second case, which applies to the well-studied case of SN 1993J and possibly to SN 2001ig, is the least common case and requires that the companion very efficiently accretes the transferred material -in contrast to what is required to recover the overall IIb rate. The fast increasing number of type IIb detections may lead to more solid constraints on model uncertainties, like stellar wind-mass loss and internal mixing.