Nine Monster Stars at the heart of the Tarantula Nebula 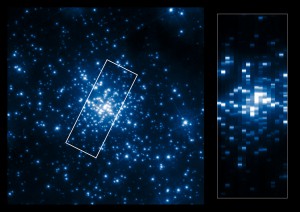 The star cluster R136 at the heart of the Tarantula nebula was known to harbor 4 very massive stars. New data taken with the STIS spectrograph on board Hubble reveals a total of 9 monsters stars that appear to have masses around or well in excess of a hundred solar masses.

This is the first paper in a series discussing the UV spectra of the brightest objects.  The “monster stars” fully dominate the strong helium emission lines that have also been seen in other very young massive star clusters, indicating that such extreme stars are more common than we thought. This argues in favor of extending the initial mass function well beyond the canonical limit of 100 solar masses.