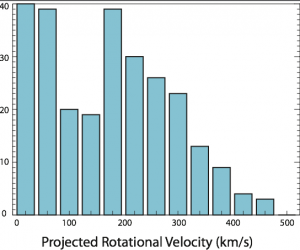 The rotation rates of 335 apparently single early B-type stars in the Tarantula nebula  show a bimodal distribution, resembling that found for late-B and early-A type stars.

The origin of the bimodality remains unclear, although it is likely that magentic braking and binary interaction play a role.